The Truth In the Details

I wanted to title this “Learning to kill” but refrained from tempting the search engines and NSA quite so much. I’ve finally got time to recap the best things about recent appearances – namely World Horror 2016 and Spring Into Books.

World Horror was a convention rich in guests and very lean in attendance. It was a shame for the organizers but those of us who were there got unprecedented access to authors and other guests that normally would never happen. I’m not complaining that I’m now on hugging terms with greats like Kevin J Anderson after spending a convention weekend in Provo – we even talked politics and religion for an hour over drinks.

Best part of World Horror was the ballistics gel presentation by D.K. Goddard, a local author and publisher. He brought a lifelike slab of ballistics gel and let us all pretend to stab and maim it with weapons. All in the name of authenticity when we are writing action scenes. I learned that if you’re going to stab someone, it is much easier to push the knife into flesh than I anticipated and far more difficult to pull the blade out. Fully-engage-your-muscles difficult. Also, slicing someone’s throat – something that looks as easy as cutting through room temperature butter in the movies – takes great effort. It’s more like dragging the blade through six inches of crusty bread. If your weapon of choice is a hammer, you can do far more damage using the pointed side designed to extract nails than the blunt side. Here I am in the throws of intense research…

Best take-away from this intense experience was realizing that the truth is in the details. It’s sufficient in my writing to say a character was killed by blunt force trauma to the head. But it’s much more intense to describe the sensations of what it feels like to wield the weapon. The lesson was invaluable and will be called upon in the future for certain.

A month later, at Spring Into Books, I got to meet an adorable eight year old who loves horror. (Shown here with permission from his mom.) 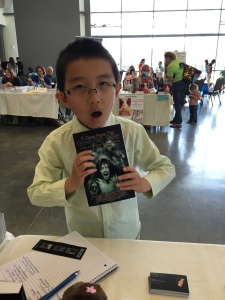 I had the pleasure of teaching a presentation on writing for beginners, the last half of which we spent plotting an action scene where a mutant zombie destroyed a tank. We took that one sentence and showed how it happened rather than telling that it happened. It was both interactive and fun and I thrilled to see several attendees pause to take notes during the workshop. I love giving back and mentoring young writers. This annual event put on by the League of Utah Writers is a great place for young and old to find free workshops and meet local authors and I enjoyed being a part of it.